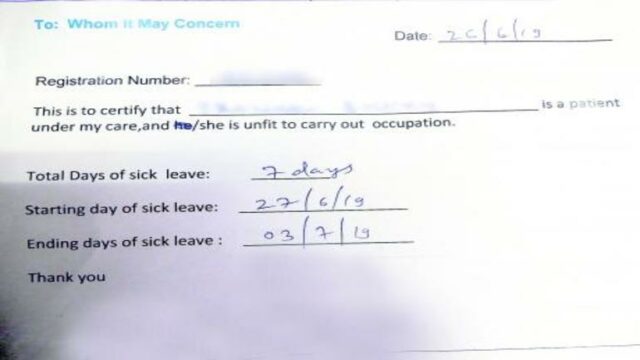 There is a doctors’ office in the Corporate Area where sick leave can be purchased for a small cost of $500.

When THE WEEKEND STAR visited this doctor’s office this week, seven persons sat waiting for their turn to see the doctor, some with eyes glued to the television, others engaged in hushed conversations.

On a notice board directly above the receptionist’s station was a sign that reads: “Sick leave $500”. There was a notation which stated that health cards cannot be used to pay for the service.

“Afta yuh go in to the doctor, and when you finish, if you want a sick leave, just ask, then yuh pay for it,” she said

“Just suh? The doctor a go just give me a sick leave if mi want one?” I asked.

“Hmmm, all yuh duh just mek sure it stamp. That’s all. Supposed you want the day starting tomorrow, then him will write it,” she said

With this information, I sat next to a woman and started a conversation.

“This is your first time here?” I asked.

“No man, this is my second time at this doctor. It reasonable man, because if you look at it, when you go to another doctor ya pay all $3,500 and you nah get eye test, urine test and dem something deh. But here suh, yuh get dat plus doctor visit and yuh bill all a come up to $3,000,” she said

Another woman also heard of this doctor’s reputation of being cheap.

“A somebody tell mi bout the $500 doctor and mi seh it betta mi come ya suh get a prescription and then go home instead a mek the trip go KPH weh dem walk past yuh come and walk past yuh go,” she said

The wait to see the doctor took about two hours. After quickly glancing through my file, he asked me what were my symptoms.

I told him of stomach pain and constant headache. The doctor prescribed some painkillers, suggested that an ultrasound be done and then asked, “You want any sick days or anything?”

“How much you want?” he asked.

He scribbled something on a file, collected his fee of $1,000 and instructed the nurse to prepare the sick leave form. The cost covers the visit as well as the sick leave services.

But this nurse was busy issuing drugs to an elderly man, so another doctor assisted.

“You travelling, going overseas?” he asked.

“No, but I wish I was,” I responded, to which we both laughed.

The sick leave form was handed over, and just like that ‘the patient’ was able to avoid being at work for seven days, despite not being ill.