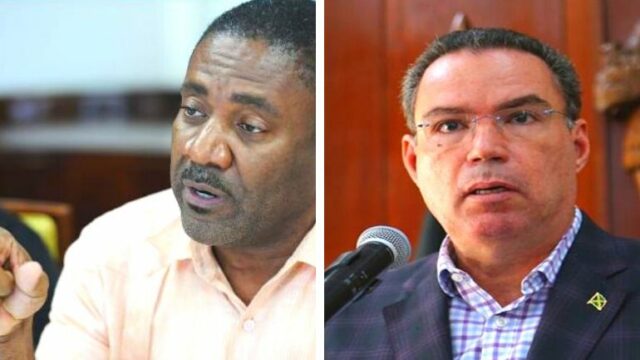 Phillip Paulwell has lost his United States of America visa.

Paulwell, a vice-president of the opposition Peoples National Party has denied knowledge of the situation.

The East Kingston and Port Royal members of parliament are currently in Cuba. He said he would have to make checks with the United States Embassy about the status of his visa. However, Dr. Horace Chang, the national security minister, confirmed it’s a revocation.

Paulwell joins Daryl Vaz, minister without portfolio in the Ministry of Economic Growth and Job Creation, as parliamentarians who have recently been stripped of their visa.

Vaz confirmed the revocation saying the US Embassy in Kingston has written to him, advising that subsequent to the issuance of the visa, it has received information that he “may be ineligible”.

Daryl Vaz, who renounced his American citizenship so he could be a parliamentarian in Jamaica, is now unable to travel to the United States of America.

Vaz acquired US citizen by virtue of his mother but gave it up in 2008 after the court ruled that he was ineligible to sit in parliament because of him being a dual citizen.

On Friday, Vaz, who is a minister without portfolio in the Ministry of Economic Growth and Job Creation, revealed that his United States visa has been revoked.

In a statement, Vaz, the member of parliament for West Portland, said the US has written to him advising that subsequent to the issuance of the visa, it has received information that the minister “may be ineligible”.

Vaz is the second minister of government in the past decade to have his US Visa revoked. In 2011 the US government stripped James Robertson, then energy minister, of his visa.