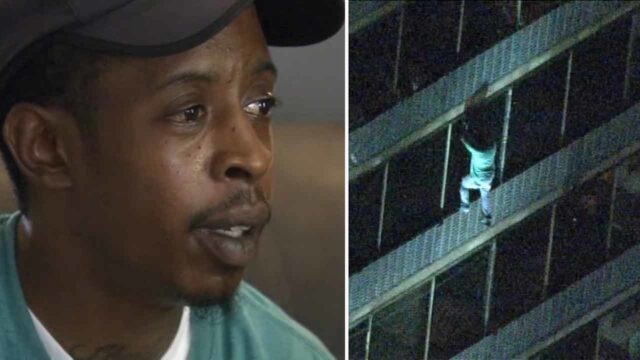 Warning: The content of this story may cause eye sweating or the temporary loss of tear duct fluid.

In West Philadelphia born and raised, playing Spiderman is where a man known only as Jermaine apparently spent most of his days after he was caught on camera climbing 200 feet during a courageous rescue attempt and a blatant example of son-shaming.

WPVI in Philadelphia reports that Jermaine received a call from his sister on Thursday evening informing him that there was a fire in the 19-story building where his bedridden mother resided. After he rushed over to the scene, police informed turned him away, so with no other choice, the 35-year-old roofer and contractor decided to take matters into his own hands…

Even though he was walking on crutches after cracking his hip on a set of stairs earlier that day, Jermaine grabbed a pair of wirecutters and began climbing, using the fenced-in balconies to reach his mother’s 15th-story apartment.

“All for my mom’s safety, period,” he explained.” I wasn’t worried about [my safety] at all. She can’t get out of the bed or walk around so if there’s a fire she needs help out.”

When Jermaine finally reached his 65-year-old mother’s apartment, she saw him on the balcony and assured her son that she was ok. Because she is bedridden, the Peter Parker of Philly simply climbed back down the 15 stories, which is when he was caught on camera by reporters, onlookers and hopefully. recruiters for a part-time job with the Avengers.

Man climbs 19-storey building to save his mother from fire pic.twitter.com/svGykOfbDO

After his daring rescue attempt, the brave son said he fully expected to be arrested once he reached the ground. Instead, a police officer on the scene sympathized with Jermaine’s situation and let him go.

“When your adrenaline is pumping and you think your mom is dying, you’ll do anything you can.”

To test this theory, I immediately left a message for my daughter, informing her that I was stuck in a burning building.

“You ok?” she texted back two hours later. “You should tweet at the fire department if you’re in danger.”

Officials later determined that the blaze was caused by a trash fire. Four residents and three police officers were hospitalized for smoke inhalation and heat exhaustion, NBC News reports.