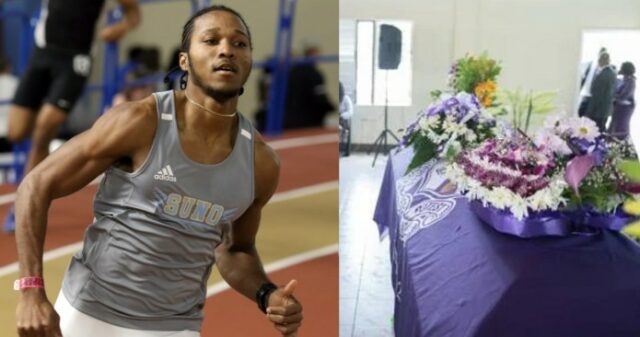 Twayne Crooks’ mother, Marie Chambers Garvey, was inconsolable as she celebrated his life at the Lionel Town Seventh-day Adventist Church in Clarendon yesterday.

“Jesus Christ, oh God, me feel terrible. Losing a child, it nuh easy. It’s not easy! Me belly a bun me. Losing Twayne … oh my God,” she said crying and rubbing her belly.

Chambers Garvey said that Crooks, on his sick bed, asked to be returned to Jamaica if he died.

Though the pain was unbearable, she, too, found some comfort in knowing that her son’s body was returned to Jamaica.

Scores of persons packed into the church yesterday, and dozens more took up position on the outside, all in a bid to pay their last respects to the talented, mild-mannered athlete. Among the mourners was was one girl walking around that seemed to be carrying a ton of pain and hurt. She is Khadeejah Tomlin, Crooks’ childhood friend.

“We grew up together … we basically went to the same basic school, primary school and high school. I can’t express the feeling I’m having right now because like a month before he passed, we had plans of linking up when he came to Jamaica. This is when he finally came and here I am, saying goodbye,” she said slowly.

Tomlin, who was hoping to see her friend again soon, says she refused to believe the news of his passing.

“I couldn’t believe it. I was on Facebook when I saw someone posted it and I texted him immediately and realised seh me nah get nuh response. I was crushed because it was just so sudden. We were just making plans. No sign, nothing.”

“I’m feeling sad and distraught right now. We have run on the same 4×400 team at the Penn Relays, and that’s a good memory I have of him. He was a hard worker, a well-motivated person and motivated everybody around him to do good, and he was the type of person that you feed off a him energy. So yuh can know when him sad, happy or anything. I found it hard to train when I heard that he passed away. Me a tek time a cope,” he said.

Younne Reid, head coach at the University at New Orleans, described Crooks as a selfless man.

“I spoke with him after he fell ill. Twayne wasn’t worried about his sickness, he was worried about whether or not he was letting his team down. Twayne was a master at school, he had a 4.0 GPA. He was more than just a student or an athlete…he was a selfless champion. He will always be cherished by his teammates and the Southern University at New Orleans,” he said.

Source for this article